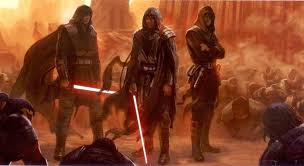 Ajunta Pall was initially from the Jedi Order and he was Star Wars’ first Sith Lord.

He was training as a Jedi Padawan and got his knighthood, and even achieved the rank of Jedi Master.

Instead of focusing on lightsaber combat or Force Meditation, he started to learn and perfect the ways of Alchemy, discovering the elusive secret of creating and shaping life.

An Outcast of the Jedi Order: Part of the Dark Side

The Jedi Order always frowned upon such unnatural powers, and they tried not only to stop Pall and his followers from learning more but actually erase all of the knowledge, as they deemed it part of the Dark Side of the Force.

Master Jedi Ajunta Pall thought the Jedi were being naive and intolerant, and he declared a war against them, together with his faithful followers.

This was the beginning of the Hundred-Year Darkness.

High General Ajunta Pall was now fighting strategically and on the field.

On the last battle on Corbos, he killed dozens of Jedi, and he and his fellow Dark Jedi held on valiantly until the Jedi Order defeated them.

They were dishonored, discharged, and exiled.

The First Sith Empire Ever: So It Begins

The exiles searched for a habitable world, and it was then that they discovered the red world of Korriban.

The Dark Jedi came out and discovered that the world was already inhabited by the Sith species, a species that was Force Sensitive, belligerent, and technologically primitive.

The Sith resisted the Dark Jedi’s pursuit for their Force Knowledge and their attempts at subjugation, but eventually, Ajunta Pall recruited the Sith’s Shadow Hand.

Pall executed Graush, the Sith King, as his Shadow Hand betrayed his species.

The Sith were in awe of Pall and the other Dark Jedi, and they started worshipping them as gods.

Pall subjugated the species and became their Dark Lord.

Here was the first Dark Lord of the Sith.

It was Ajunta Pall who founded the first Sith Empire, expanding it to the surrounding worlds and taking the planet Ziost, which was the Empire’s Capital and the planet the Dark Lord started calling home.

Death of Ajunta Pall: How the Afterlife Changed Him

After serving the empire for decades on end, Pall eventually died and was buried in a massive tomb on the Valley of the Dark Lords, the valley you know from Korriban.

However, Ajunta Pall’s spirit was still inhabiting his tomb, and he stayed in this world through the use of Alchemy.

He would spend his afterlife thinking about what he had done, and reviewing his life, eventually questioning his actions.

Some millennia after, Revan entered Ajunta Pall’s tomb to get his sword, and he was confronted by Pall’s spirit.

He told Revan of the shame he now had of his life, and that the Sith were doomed to fight each other and kill their own order.

Revan redeemed Ajunta Pall and turned his spirit to the light side, which relieved Pall from his pain, allowing him to become one with the Force and rest at last.