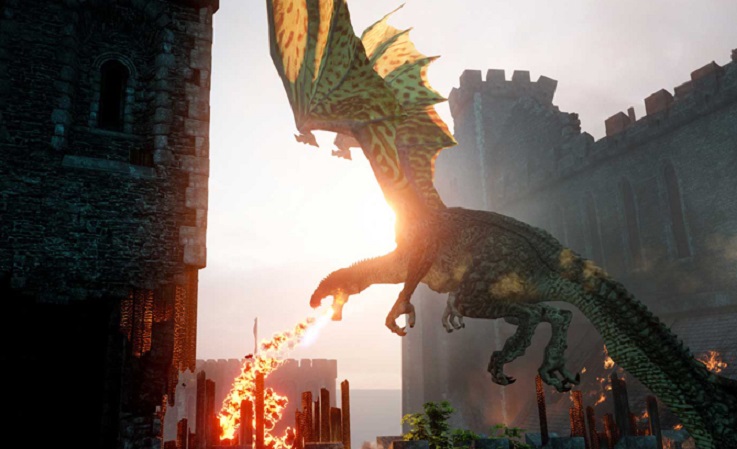 The Dragon Age Inquisition Dragons are iconic and one of the elements that add mysticism, epicness and substance to the lore and the game itself.

There are a lot of people looking for these rare mobs, either to see them up close, to hunt them, to grab the loot, or just for the achievements completion feeling.

Throughout this article, we are going to go over everything about Dragons in Dragon Age: Inquisition.

If you are looking for an Ultimate Guide you can just bookmark and refer over and over again, then you have found it as we have it all here.

Ready to start diving deeper into Thedas and its wonderful world? Keep on reading then. 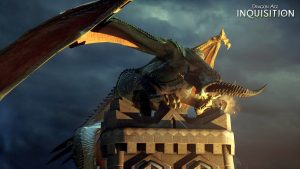 Throughout this section of this ultimate guide on Dragon Age Inquisition Dragons we are going to go over all of the different ten Dragons that are roaming the lands on this third installment of the popular series Dragon Age from Bioware.

If you like details, lore and species description, you are going to love this chapter. If you, on the other hand, are just objectively looking for the Dragon’s locations, for their levels or simply their drops, you can skip this section and delve deeper into the guide, just continue on reading. 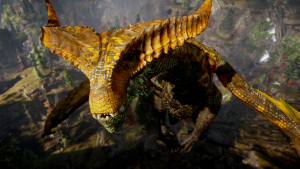 The High Dragon Fereldan Frostback is originally from the Frostback Mountains, hence his name, and when you consider this particular species while comparing it to the others you can see that their number one trait is the fact that they are very territorial.

As such, these Dragons claim large patches of land as their territory and fight off threats as they let their offspring run freely throughout all of it.

The mother is always protecting its offspring, and you can get in huge trouble if you enter this Dragon’s territory, especially if you pick a fight with one of its cubs.

Their scales are hard but can become easy to shatter once they are frozen, so the Ferelden Frostback is weak to cold attacks. 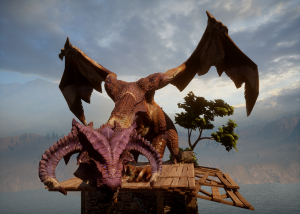 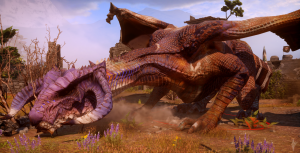 The Northern Hunter is a High Dragon that really has an appetite, and if the Fereldan Frostback is known to be a territorial beast, this one is known for its gluttony.

Travelers, scholars, and hunters have witnessed as this dragon ate vegetables, meat, wyverns, cattle, and even simple food like cheese.

Their scales are nearly impenetrable, and they insolate the Northern Hunter from thunderstorms since they don’t conduct electricity – which makes this particular species of High Dragon nearly immune to lightning attacks.

On the other hand, the dragon has been shown to fear spirit attacks for some reason. 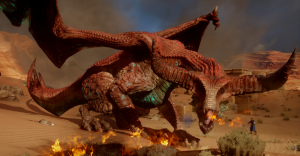 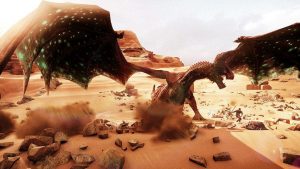 The Abyssal High Dragon was a species that everyone thought out to be extinct.

Now that this has been proved wrong, researchers claim that the reduced number of Abyssal High Dragons made the witnesses of the few that still existed mistake the species by Stonejaws or Hunterhorn Shrikes.

Their signature move is their fiery breath, which is one of the most intense of the documented dragon species.

As such, the Abyssal High Dragon is extremely resistant to fire, but can falter if its body temperature drops too low, hence its cold attacks’ weakness. 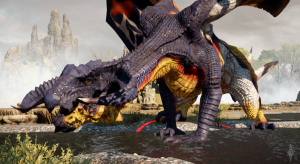 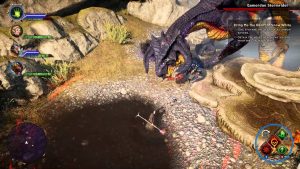 If you look at Orlesian paintings, sculptures, pottery and even their simplest decorative items, you’ll think that the Gamordan Stormriders were constantly battling humans.

This is dead wrong as the Gamordan Stormrider High Dragon is most often than not secluded in a swamp, as that is its primary breeding grounds.

These dragons rarely cross paths with humans, and they often fly under heavy storms, having developed one of the most lightning insulated skins and scales ever.

Their connection with the fade is high, and so spirit attacks are powerful against them thanks to this spiritual affinity. 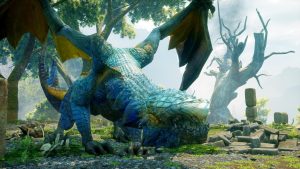 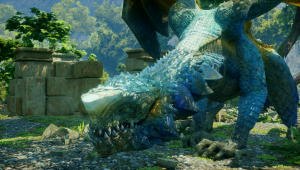 These blue dragons come from the Emerald Graves and they are perceived as the “showoff” of the High Dragon family, simply because they like to fight each other near human encampments, extending the duels for a lot of time which made humans able to watch the fights.

Another element that adds to this feeling is that the Greater Mistral has very colorful scales which shine with the sun, but the truth is these are what make this dragon species reflect the sunlight in order to keep its body temperature at record low temperatures.

These low core temperatures what are enable the Dragon to spit ice cold attacks, and on the other hand makes this species weak to fire as the animal needs to keep itself cold. 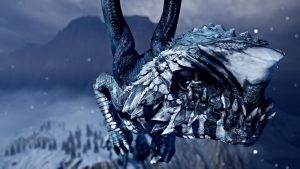 The Hivernal dragon is one of the species that had the most impact on humanity simply because it was one of the main targets Orlesians would hunt to survive through the winter.

What the humans coveted was the huge fat layer underneath the dragon’s scales. The fat wasn’t made to keep the heat in, but the keep the cold out, keeping the winter dragon ice cold inside.

Thanks to the high fat content and oily substance beneath the scales, the dragon is very flammable if the scales are broken, thus hunters are encouraged to hit it with fire attacks.

This is the high dragon species responsible for the “Hivernal Feast” tradition celebrated in small villages. 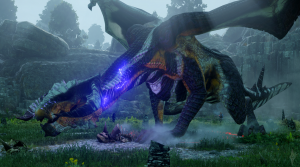 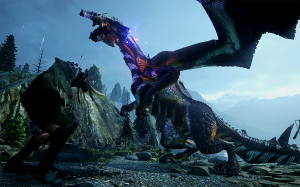 If you consider the ancient legends, the legendary Dragon Slayer Caspar Pentaghast’s last kill was of a huge Vinsomer dragon.

This dragon lives isolated in rocky coasts, and if you find it you’re going to have a sparks-filled battle on your hand.

The dragon accumulates static electricity charges as it moves around, thanks to its scales rubbing on each other, and its body produces a huge amount of power as well, so the Dragon uses electricity as its best ally.

These High Dragons roam the deserts to claim hot basins as their breeding grounds on the sandy dunes.

They hunt during the night, so if you spot one during the day it is most probably sleeping.

They love cooked meat, and while it still hunts its prey with its claws and teeth like most High Dragons, the Sandy Howler roast its food before consuming it. 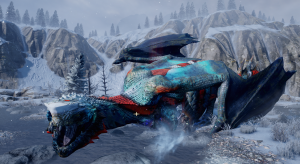 Kaltenzahn literally means cold tooth, and as such you can easily see through this High Dragon’s species weaknesses and strengths.

This species is originally from the Hunterhorn Mountains, but they migrated south and took lonely places to settle in as they don’t like company.

There are scholars attributing this migration to the south to Archdemon attacks on this particular species.

The Kaltenzahn are infamous for their high pitch screams that unnerve even the most battle hardened warriors. 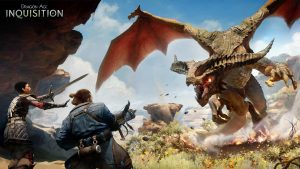 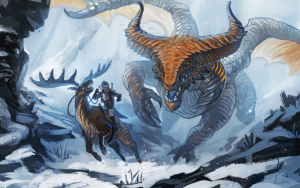 The Highland Ravager High Dragon is the most social of all dragons and it even shares its own territory with other High Dragon species, making it the most loving dragon of all.

This isn’t good to humans though, as the Highland Ravager is a dominant Dragon that shows his dominance over other dragon species in its territory by going in huge ravaging sprees, hence its name.

It is common to see these dragons swallow whole livestock herds and razing whole villages to show off to its peers. 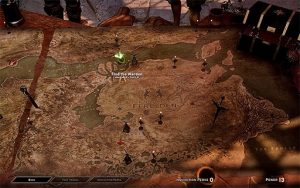 If you are looking for these 10 High Dragons in Dragon Age Inquisition (DAI), then we have them all written down, and they go as following:

Finally, as stated, knowing the Dragon’s level is also very important if you wish to become a Pokemon Mast… I mean, Dragon Master.

Just consider the fact that levels aren’t everything and if you’re playing on hardest difficulties, scaling does apply, but take this as a general guide:

If you are going to tackle these dragons, make sure to pick up their loot afterwards, as there are lots of good stuff to earn for brawling with these titans.

We’ll continue this Dragon Age Inquisition dragons guide by letting you know what each dragon drops. 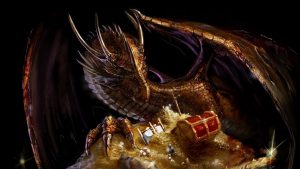 The Dragon Age Inquisition Dragons Drops are as follow: 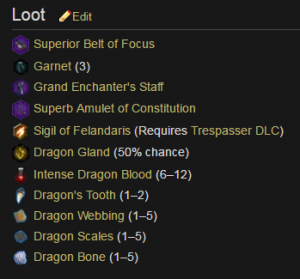 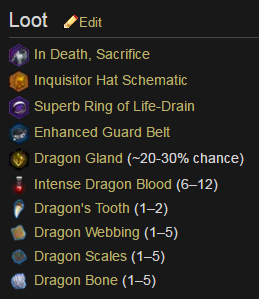 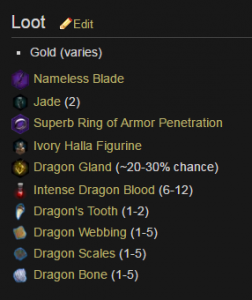 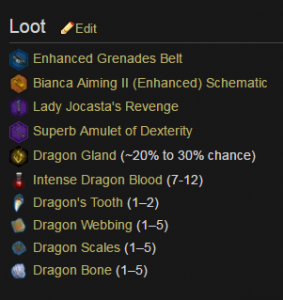 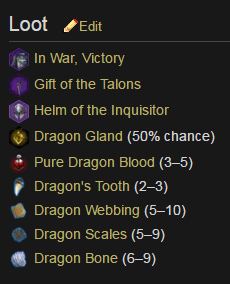 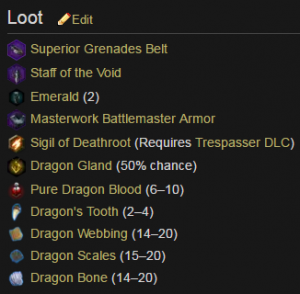 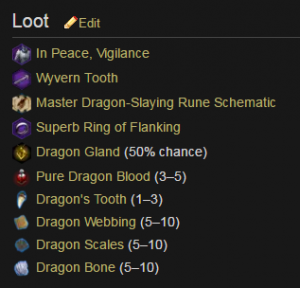 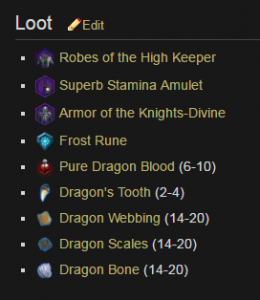 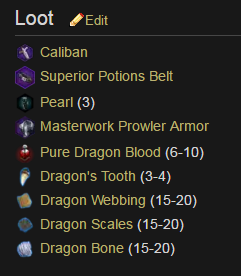 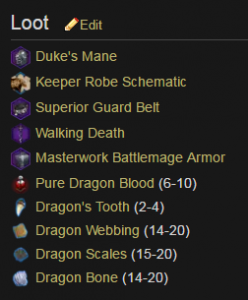 This is why looting those dragons is important, so make sure you do and avoid selling items you may later need for crafting or using.

We hope you enjoyed our ultimate dragons guide, and now we’re going to end with a section about Dragons Bane. 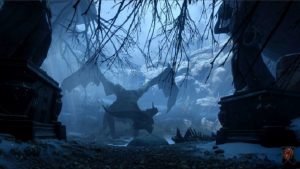 One of the most annoying bugs of Dragon Age Inquisition is the one that prevents you from winning this trophy.

To win the Dragon’s Bane trophy you need to hunt every single dragon, but sometimes the achievement doesn’t appear.

What you need to do to get the Dragon’s Bane trophy bug away is to load an older save and kill the Fereldan Dragon again, when the dragon dies the achievement should be yours.