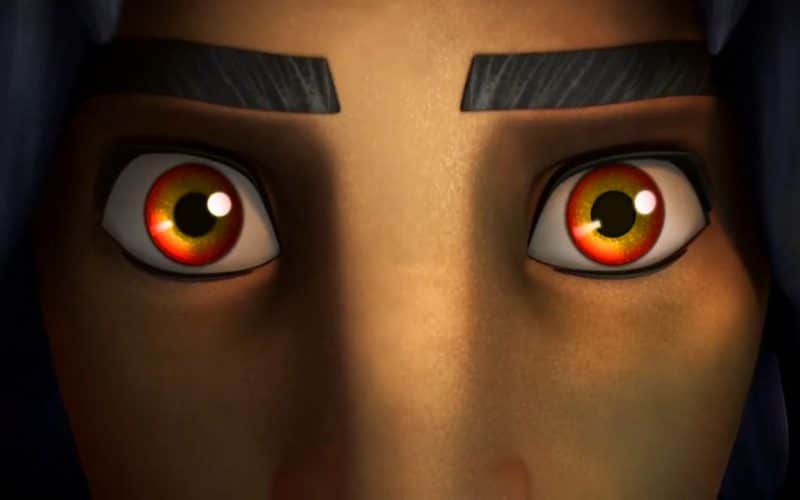 The Sith Eyes from Anakin and other Sith Lords are yellow in color. However, in Dooku, Kylo Ren, and even Anakin himself, this manifestation isn’t clear.

Dooku and Kylo Ren do not have Sith Eyes, and Anakin’s eyes go from yellow to normal and yellow again. What’s the drill?

It’s interesting that bloggers are picking this up again now that Kylo showed himself immune to this and some of the new material already showed the Sith eyes again. Having said that, thought I’d write more about this topic, even though I mentioned Sith Eyes and their explanation in the past already.

One of the things to bear in mind is that the yellow eyes Sith Lords often have are a collateral effect of the Dark Side.

This manifestation is often accompanied by skin decoloration, vascularization, and a bloodshot tint to the iris and white part of the eye.

You can watch Anakin’s Sith Eyes when he is duelling Ahsoka Tano in Star Wars Rebels.

On the other hand, when Luke removes Vader’s helmet, they are normal even though Vader was far more exposed to the Dark Side at that particular point of his life.

I already mentioned why these yellow eyes appear and disappear in this post, but for those who didn’t read it, I’ll go through it again.

First off, notice Maul, Opress, and other Sith always have these eyes “on”. Some others don’t have them at all, like Dooku, Snoke, Kylo, and Asajj Ventress.

We could say by this point that Snoke is a creature we don’t know much about and that Dooku, Asajj, and Kylo were all Jedi before turning Sith.

On the other hand, we know this doesn’t mean anything as there are plenty of ex-Jedi who develop Sith Eyes when they turn. I’m talking of men like Quinlan-Vos and Anakin himself, although they both reverted back to normal at one point or another.

The Updated Explanation of Sith Eyes: Dark Side Eyes in 2021

Since I first wrote my post on Sith Eyes, there has been a lot of material coming out.

In 2021, the yellow eyes have a lot more source material to consider, and so I’ll update my explanation, although I don’t consider my past conclusion wrong at all.

As far as I’m concerned, the Sith Eyes appear when the user is in-tune with the aggressive aspect of the Dark Side.

The aggressive, enraging aspect of the Dark Side is responsible for this corruption, as the most aggressive and less manipulative characters are the ones found to have the yellow eyes the longest.

Palpatine had a huge connection to the dark side, but he masked his Sith Eyes the same way he masked his presence to the Jedi or his Dark Side manifestations from Jedi as expert in reading the flow of the Force such as Yoda and Oppus Rancisis or Tyvokka.

What about Kylo Ren? He was always in rage and tantrumming around.

Well, look at the way he killed his father… he almost had to ask Solo to commit suicide, such was his doubt.

Did that seem like a man in tune with the rage and aggression of the Dark Side of the Force?

What about Count Dooku’s Eyes?

Again, if you delve deep into Dooku’s lore, read the books and watch what he says in the movies or series carefully, you’ll see that he is a manipulative Sith. He keeps a cold head, and those aren’t the aggressive, blind-rage type so they don’t get the Sith Eyes manifesting around often.

As for Anakin, try to think of when you saw him with yellow eyes, and reach the same conclusion I did – it was when he was clearly blind by rage and hate.

There are a lot of clues that point out this being the official information and cannon in both the Lucasfilms and Disney Universe of Star Wars and Star Wars lore.

Finally, if you liked this topic, then I advise you to follow the Star Academy Youtube Channel, as it has a lot of juicy lore on everything related to a Galaxy far away!