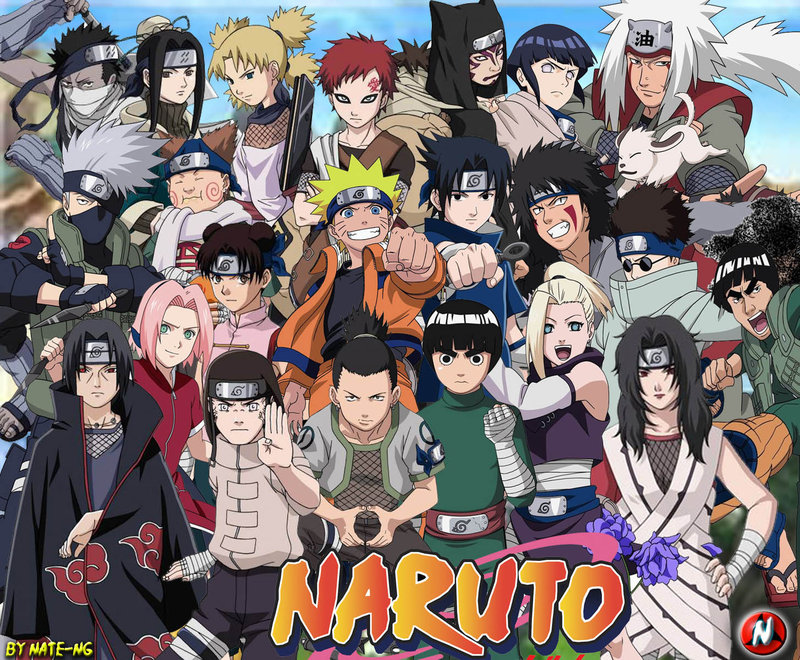 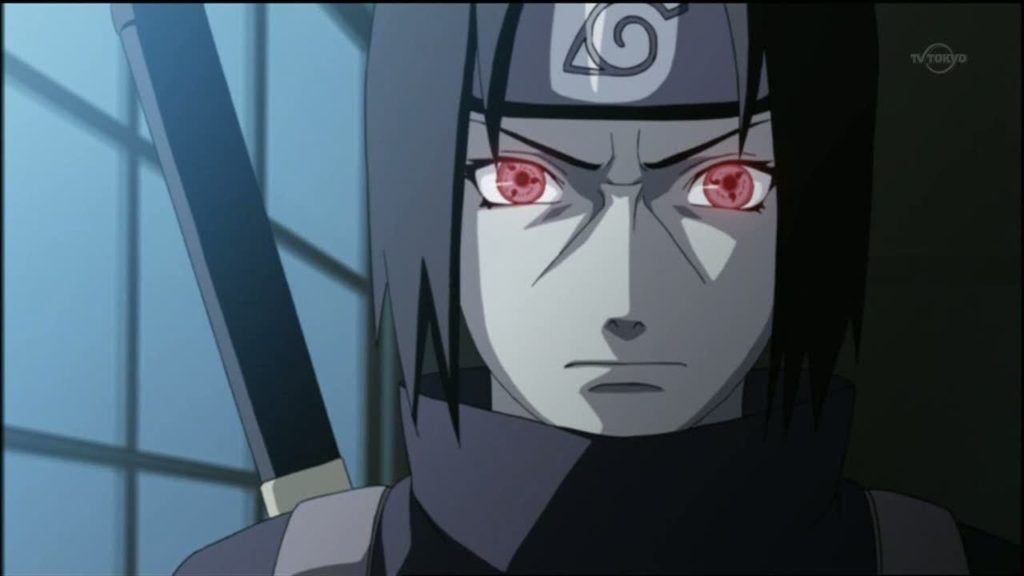 Itachi was an incredible shinobi as his ninja career skyrocketed at huge speeds.
He was equally proficient in all three principal forms of ninja ability and gained praise from foes and allies alike; one of the Sannin, Orochimaru, even went as far as admitting Itachi was stronger than himself.
During his ultimate showdown with Sasuke, the latter could not get the better of him, and it was Itachi’s sickness that killed him in the end.
Even when he was bound, Kakashi Hatake, Kurenai Yūhi, and Asuma Sarutobi were still pushed to their limits against Itachi. 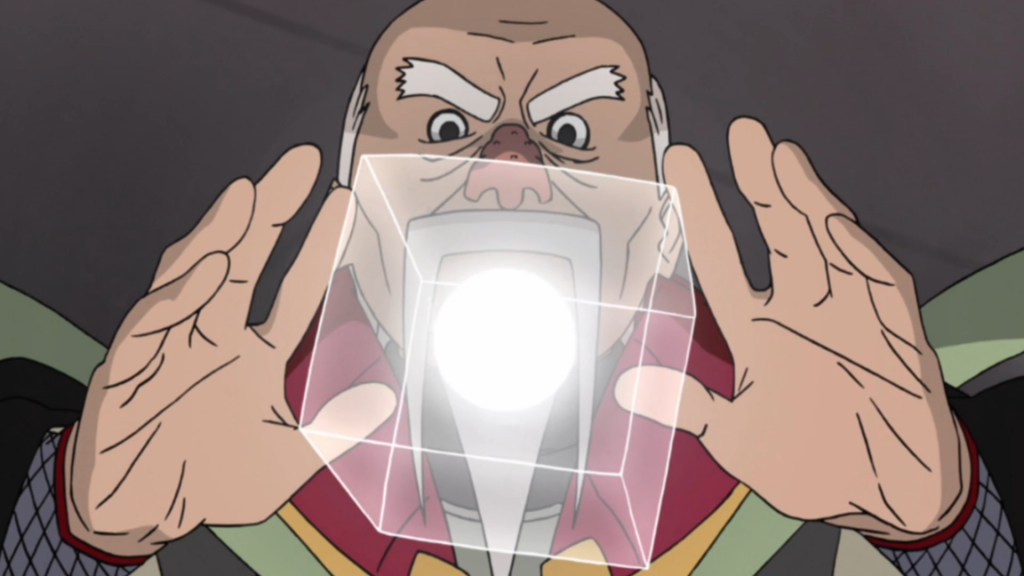 Ōnoki is a strong and capable Tsuchikage.
The only Kage to be able to resist Madara’s noxious pollen mist with his powerful Dust Discharge technique.
When Tsunade healed him, he managed to wipe out all twenty-five Susanoo. 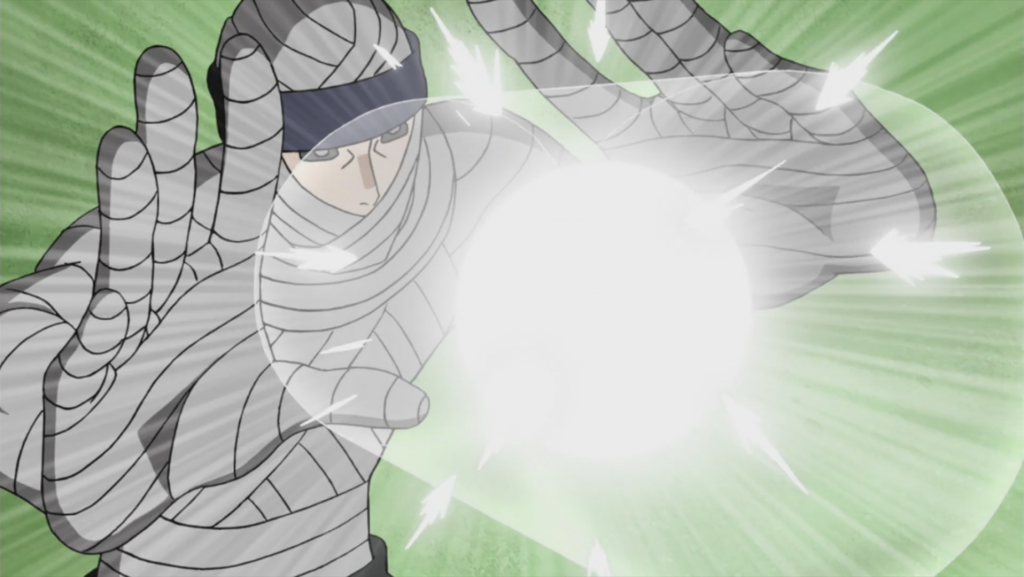 Having been the Kage of his village, Mū was an immensely powerful shinobi of the most powerful ones in Naruto.
So strong was he that he was chosen to be the bodyguard to his forerunner.
His skills were such the Allied Shinobi Forces leaders concurred that the only way to stop him was to have Ōnoki confront him on the battleground.
He seems to be extremely educated and analytic, and he looks like he is able to identify the precise procedure used to locate his position nearly instantly after detection, apparently with no prior information regarding the technique in question. 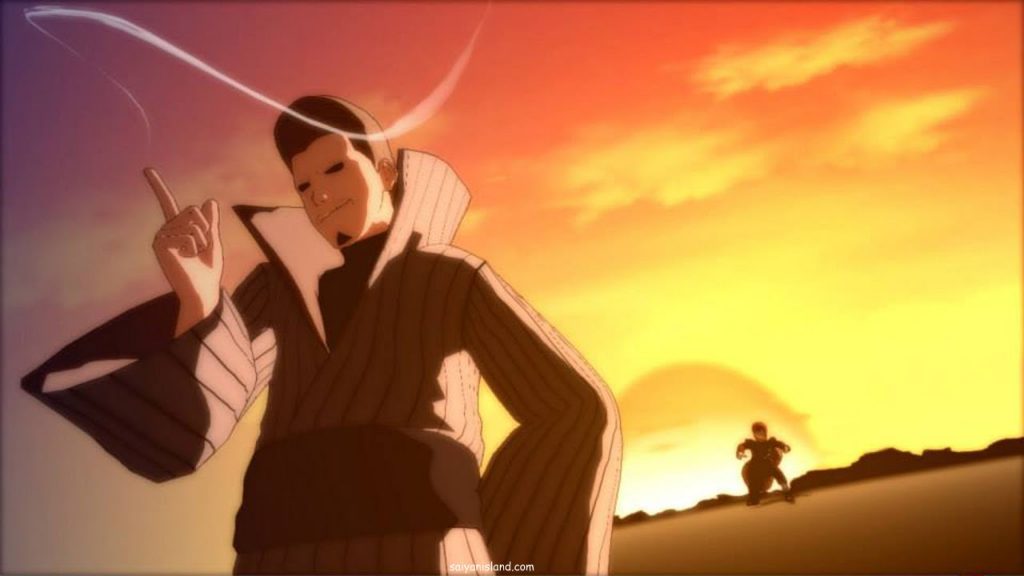 He was an immensely powerful shinobi.
Even informing a large portion of the Fourth Division on the best way to eat him, not one of them was capable of getting the upper hand, enabling him to kill and injure a substantial amount of them with relative ease, showing that Gengetsu’s combat capabilities were truly fearsome.
An actual testament of his power is the fact he was capable of killing the Second Tsuchikage — albeit at the price of his life. 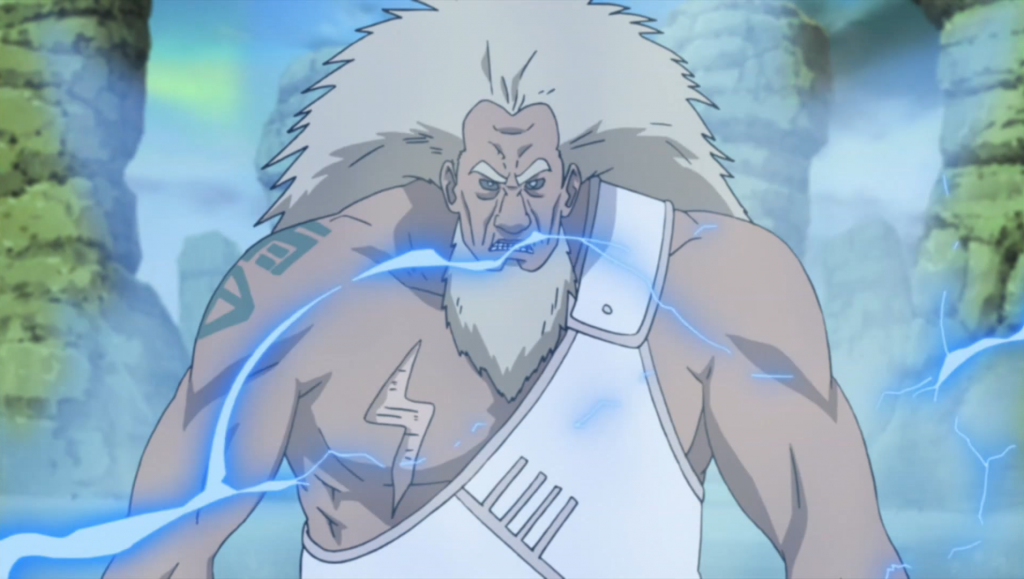 The Third Raikage undoubtedly an immensely powerful shinobi and is recognized as the best Raikage that Kumogakure has ever seen. 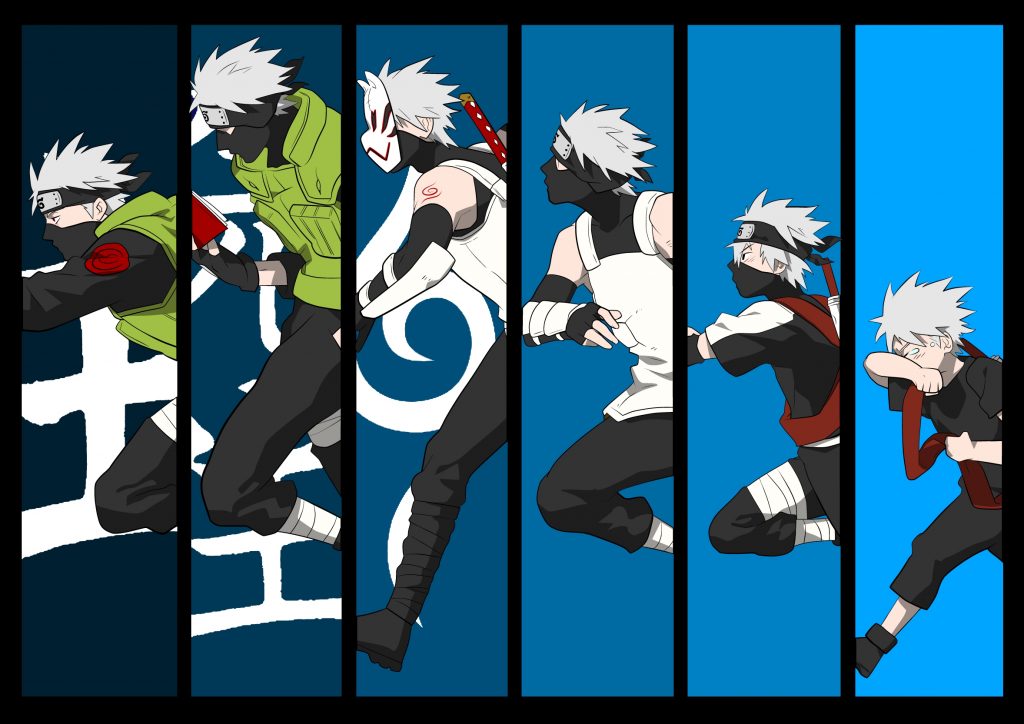 Tsunade and Jiraya never saved up compliments on Kakashi, and throughout the series you would see him be a match for everyone who was coming his way.
Kakashi’s extensive and varied skill set enable him to effectively provide invaluable support against adversaries of any level in any scenario.
For years, many leading individuals have considered Kakashi to be one of the very best candidates for Hokage, and he finally became the Sixth Hokage even after recently losing his Sharingan, showing that his abilities weren’t weakened.
His art and reputation as Hokage have revealed much political weight, able enough to help make his views respected by the remainder of the world.
He could handle himself against the Demonic Statue of the Outer Path, as well as the Ten-Tails (Juubi) itself.
After getting both Sharingan and also the Six Paths Power from Obito, Kakashi’s skills allowed him to pose a threat to Kaguya Ōtsutsuki, the most powerful ninja ever. 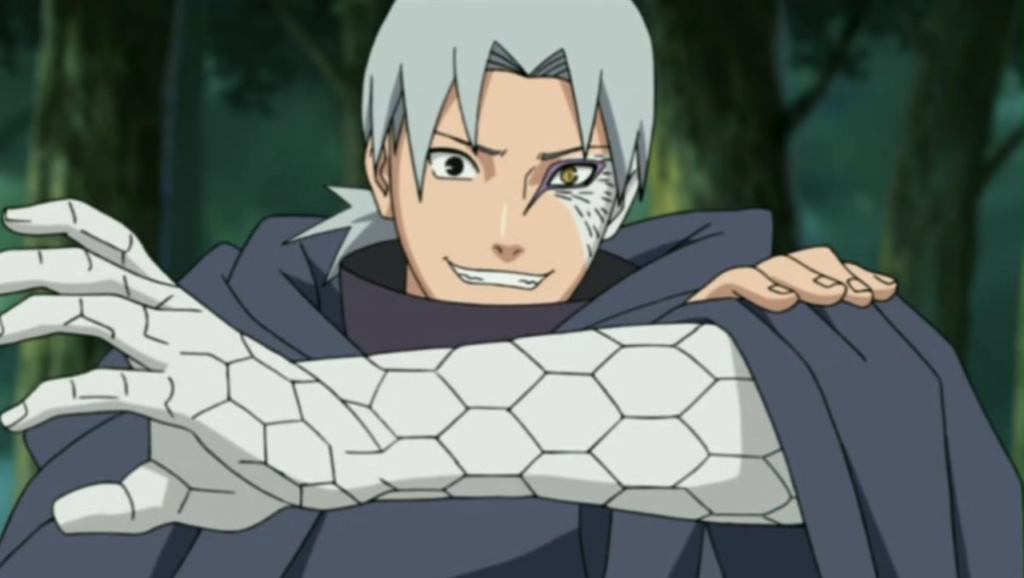 Despite formally being a genin, Kabuto has proven himself to be a proficient and cunning ninja far beyond that level, especially due to his medical abilities.
He’s been revealed to be able to kill Anbu with comparative ease, and even stated he could manage at least ten Anbu members.
Through keen observation, Kabuto can immediately discover the best way to conquer any scenario.
He can gain an advantage by quickly exploiting his opponent’s weakness, when up against a stronger opponent.
Even with Tsunade flipping his nervous system, Kabuto quickly used his amazing adaptability to regain control.
Upon mastering senjutsu and adapting to his bodily modifications, his fighting prowess was accentuated to the stage he could withstand an assault from the combined efforts of Sasuke and Itachi Uchiha while overwhelming both of them on separate occasions. 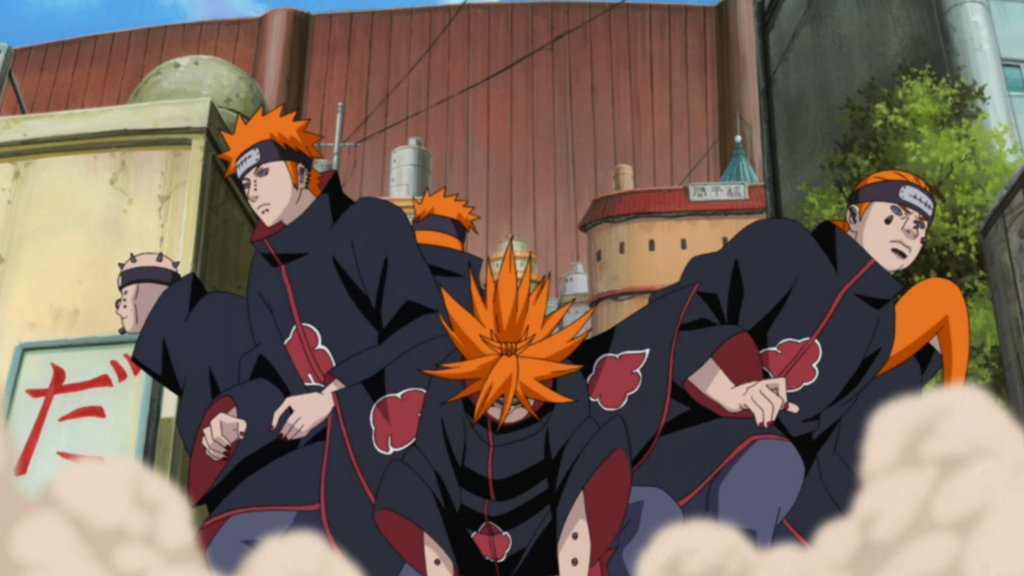 Fukasaku said that without understanding the power of Pain, no one could get the better of him, and even Obito said that Jiraya could never beat him, as he was invincible.
Nagato successfully killed Jiraiya with relative ease, and let’s not forget the amazing feats he pulled off during Konoha’s invasion. 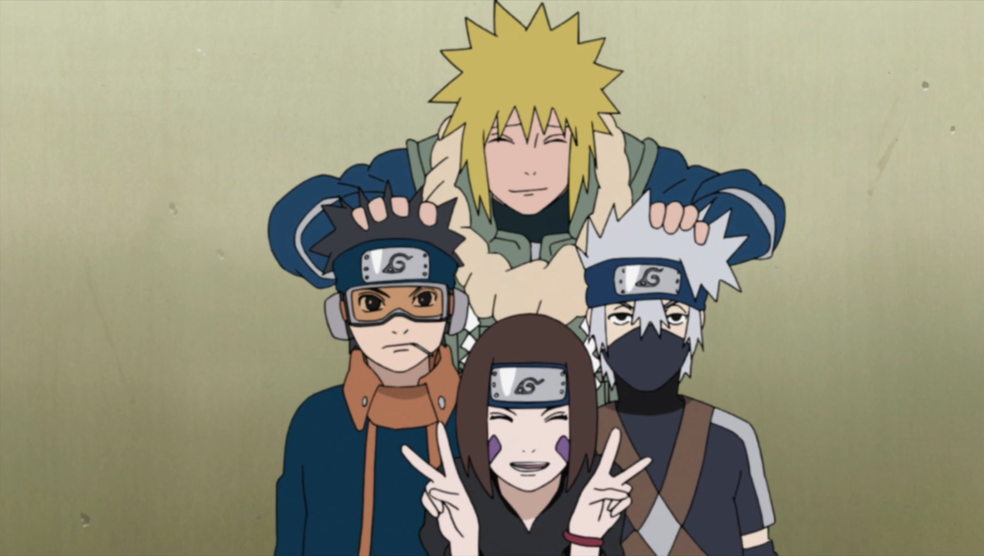 By Jiraiya, Minato was clearly one of the very most talented shinobi who ever lived.
During the Kyuubi Nine-Tails’ assault on Konoha, Tobi believed Minato to be the only one capable of interfering with his plans and it was only thanks to Minato’s interference that the attack didn’t end in total annihilation.
Minato was believed to be the only one that could have prevented the danger Orochimaru posed to Konoha, when, years after, the invasion of Konoha loomed, and for that reason, his death was deeply regretted. 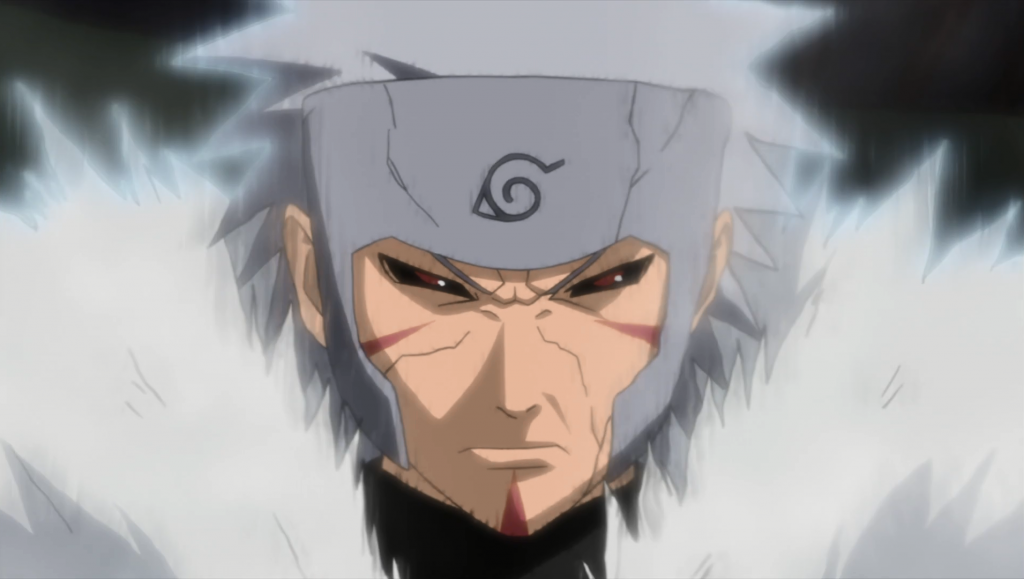 He was hailed as one of the strongest shinobi of his age plus one of the highly gifted shinobi in history.
A testament to his technique was him fighting Izuna Uchiha, murdering him while the latter had been noted to be as powerful as Uchiha Madara.
His skills were held in such high regard an Anbu captain found his power hard to believe, even having high uncertainties that the Third Hokage could get the better of him and his brother. 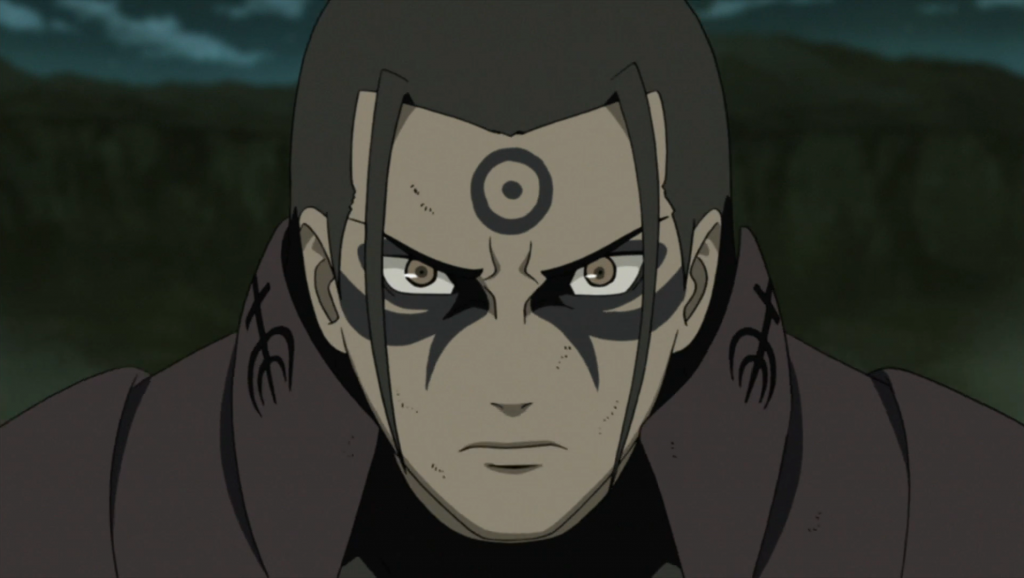 Hashirama is reputed as the peak shinobi of his age, greatly valued by the shinobi world and with a personality and power so great he earned the title of “God of Shinobi.
His art was such that Kabuto Yakushi claimed that there was no one living that could match it.
With his overwhelming power, Hashirama unifies multiple clans together in the village under his leadership and could subdue several tailed beasts.
Madara Uchiha declared his inferiority something that dated back with their childhood, and a proof of Hashirama’s power was his capability to beat Madara more than once. 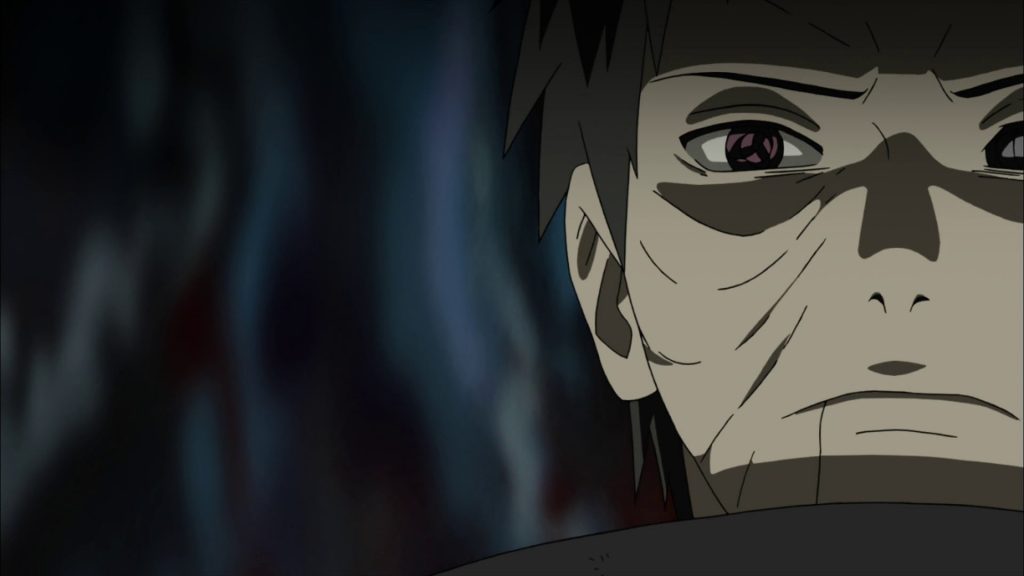 In Konoha, Obito’s skills were a bit underwhelming, not being able to catch up with Kakashi’s progression and struggling to match his classmates from School.
In Obito, Madara found great potential despite his poor performance and for that reason he selected him.
The hopes of Madara were verified, as, under his tutelage, Obito dramatically improved his skills to the point where he closely reached Madara’s level.
At different times, Obito presented a challenge to Minato (the Fourth Hokage), won against Konan (an S-class criminal), and fought Naruto, Guy, Killer B, and Kakashi all together. 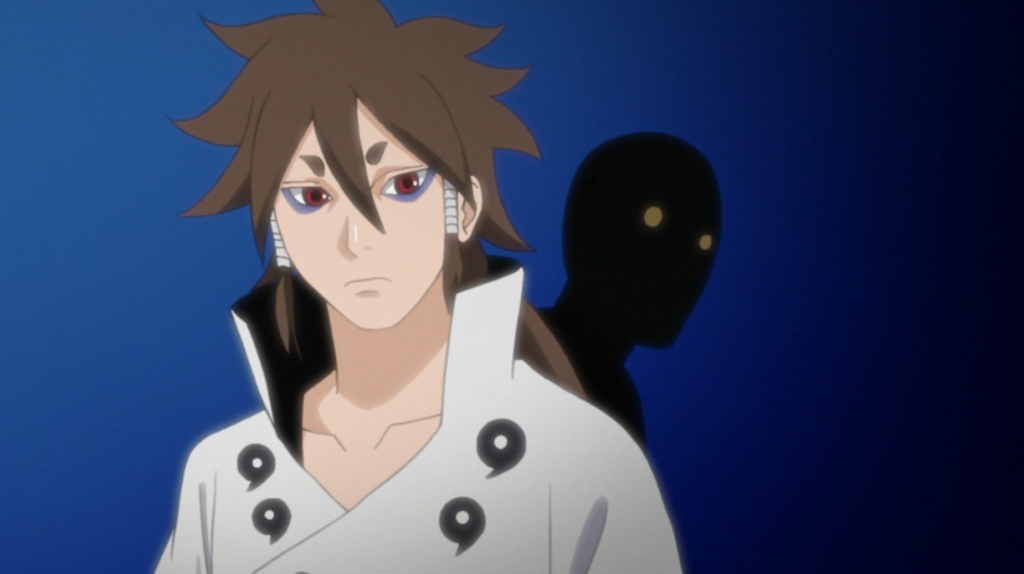 Indra was the elder son of Hagoromo Ōtsutsuki and also the ancestor of the Uchiha clan.
Along with his skill in battle, Indra inherited his dad’s strong chakra and spiritual energy.
Indra possessed a derived type of his grandmother’s dōjutsu; the Sharingan.
He’d also awaken its complex kind: the Mangekyō Sharingan which is presumably the spiral-like design that was shown when he debuted.
He became the very first known wielder of Susanoo.
Attaining command on the technique and its various developments, he became capable of fully manifesting and “stabilizing” it into its Entire Body form, dwarfing the encompassing landscape. 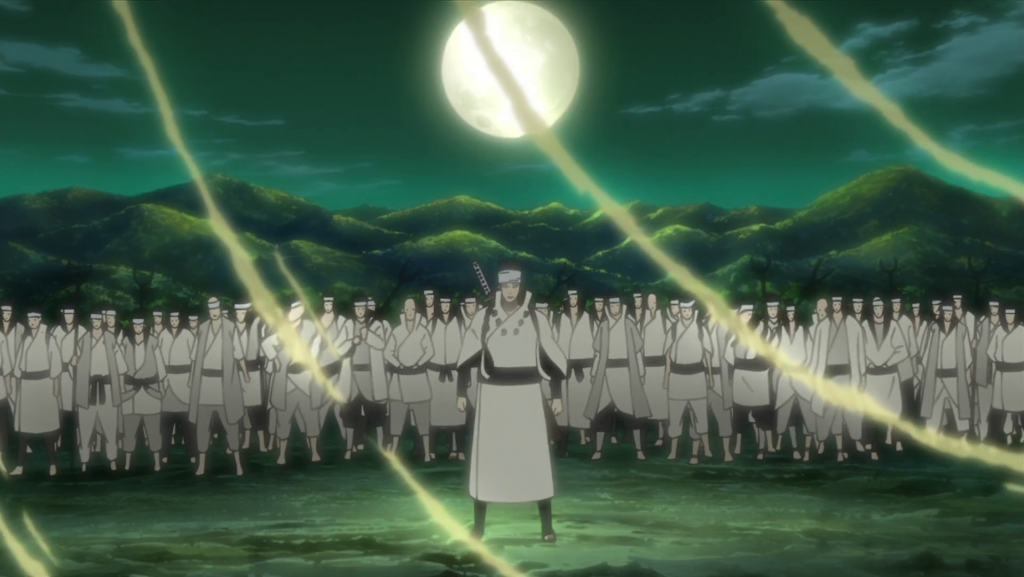 He was the youngest son of Hagoromo Ōtsutsuki and heir to his teachings. He is, also, the Uzumaki family ancestor, as well as the ancestor of the Senju clan.
Over the years, through grueling work and dedication, plus support from his buddies, Asura awakened his power, his dad’s “body”: life force, stamina, and physical vigor; power rivaling that of his brother’s as a late bloomer.
This granted him substantial chakra reserves and strong vitality, along with greater longevity.
After receiving the power of Hagoromo, he was granted the Yin–Yang Release.
In conflict, Asura was seen encased in a three-headed avatar capable of going head to head with Indra’s perfect Susanoo. 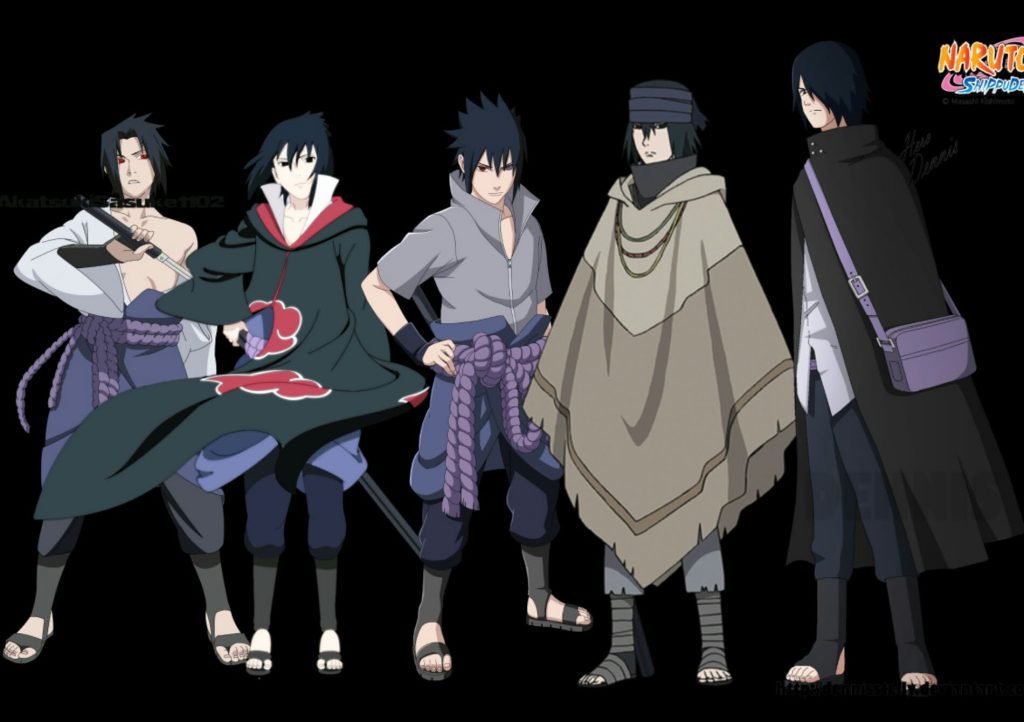 Sasuke self-taught himself a vast array of his lost clan’s techniques.
His abilities are compared to various extraordinary people like Orochimaru and Kakashi Hatake;
Madara himself confessed that if Uchiha Sasuke was born in the time of Obito, he would have selected Sasuke to utilize as a pawn over Obito.
After awakening and adjusting to his Mangekyō Sharingan, Sasuke proved capable of fighting against at least two Kage and their bodyguards.
After getting buffed with the 6-Paths Chakra, Sasuke and Naruto were able to fight Juubi’s Jinchuriki after he absorbed the tree form.
Later, during his final conflict against Naruto, Kurama also noted that Sasuke was matching Naruto’s power. 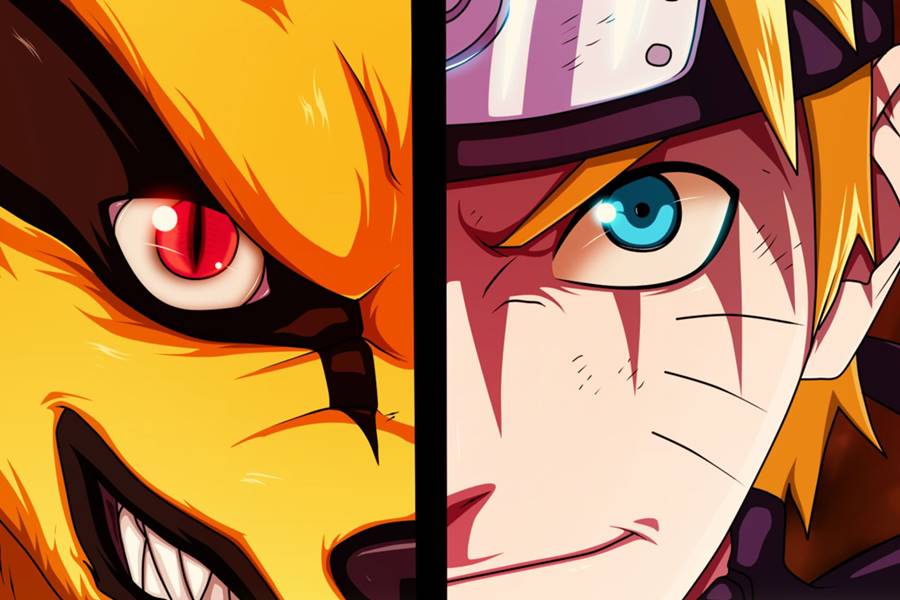 Naruto didn’t show much ability regarding being a shinobi.
Through perseverance and sheer willpower, Naruto managed to push past this stumbling block to master very hard and sophisticated techniques as a late bloomer, by mastering the Multiple Shadow Clone Technique earning his graduation.
Naruto was hailed by Konoha, a hero, and worthy of the title Hokage after beating Pain.
By the Fourth Shinobi World War, Naruto’s existence on the battleground became much like his father’s; with his unique skill set, grade shinobi could dramatically alter the outcome of the battle even against several Kage.
By war’s end, Naruto has been recognized by other people to have surpassed all the preceding Hokage. 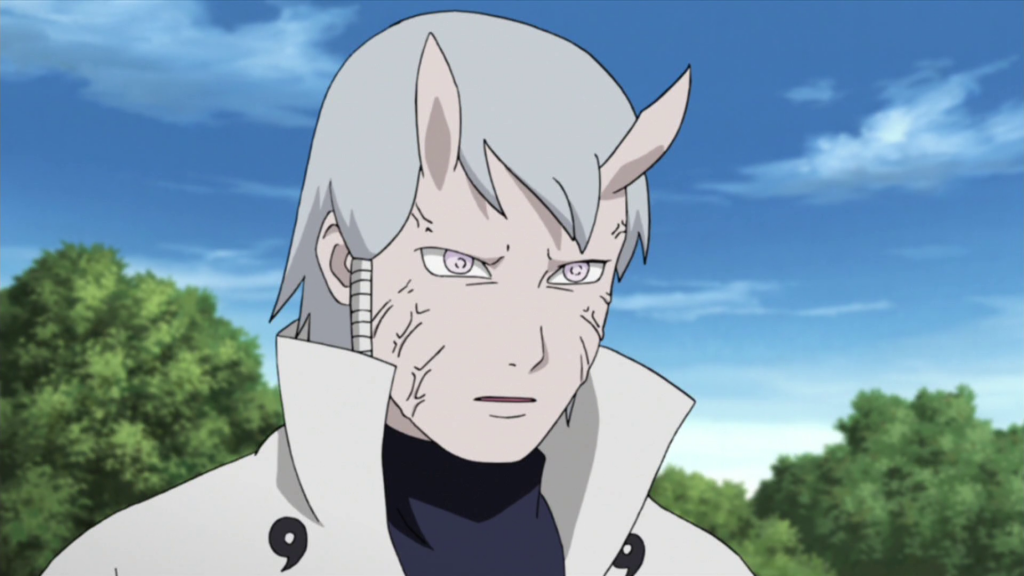 Hagoromo Ōtsutsuki’s twin and among the very first people to be born with chakra.
One of the most effective figures ever, he managed to defeat the Ten-Tails in battle together with his brother.
He was likewise noted to have inherited his mother’s powerful chakra and wielded the Six Paths Yin Power that he used in combination with the Six Paths Yang Power of Hagoromo to seal Juubi. 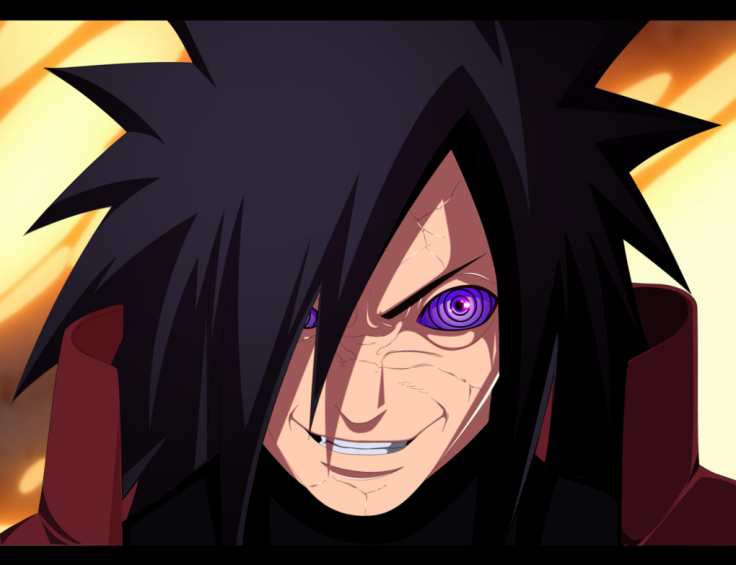 The strongest of the Uchiha clan plus one of the most talented shinobi in history.
History remembers him best for having the ability to compete with Hashirama Senju, a “God of Shinobi.”
For this reason, when Obito started managing under the name of Madara, the mere threat of Madara’s power caused the Five Great Shinobi Nations, including the normally neutral Land of Iron, to ally themselves for the Fourth Great Ninja War.
After his return from death, Madara proved himself to be higher than a match for the nine tailed beasts and the five Kage, conquering all of them single-handedly at different times. 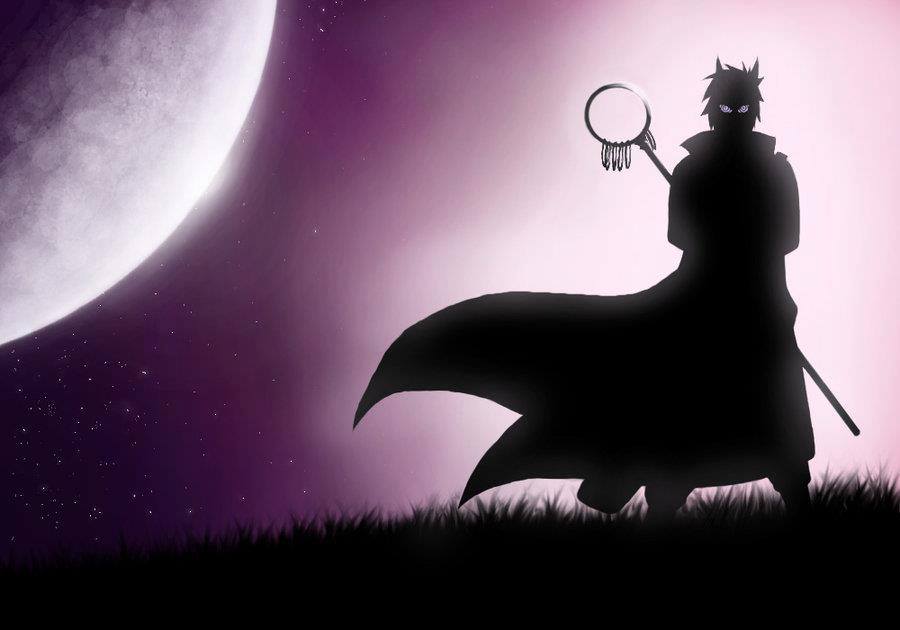 Hagoromo Ōtsutsuki known to the whole world at large as the Sage of the Six Paths was a legendary godlike figure who founded Ninshū which generated the development of the ninja world.
Though we do not know much about all of his abilities, Hagoromo is widely accepted to be the strongest figure in history, second only to his mother, having defeated the Ten-Tails.
The power of his chakra was afterward shown to even transcend time itself, as we was able to continue watching the world and meet with individuals after his passing.

She’s the matriarch of the Ōtsutsuki clan and mom of Hagoromo and Hamura Ōtsutsuki, who had lived long before the initiation of the hidden villages, during an era of never-ending wars between humanity.
She became the progenitor of chakra and consumed the fruit of the Shinju-
According to Naruto Uzumaki and Sasuke Uchiha, Kaguya possesses more chakra than both the Ten-Tails and its jinchūriki, Madara Uchiha, originally had.
In battle, she’s able to materialize enormous chakra fists, easily surpassing the energy of the chakra arms employed by jinchūriki.
She has also revealed the ability to meld with all the world and command the material within it.
Promising not to be mortal, she is also able to regenerate lost body parts, including a severed arm.
Although it is one of her weakest skills, her unarmed combat prowess is still extremely good as she fights on par with Naruto plenty of times.
When making physical contact with an enemy, she can stop their movements while consuming their chakra.