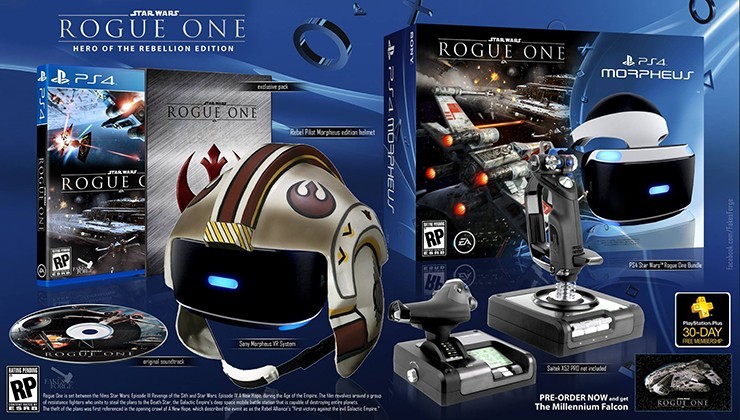 So, what are the best VR Games and Apps available now?

There has been a lot of demand for PS4 VR games, and that’s a no brainer since the console’s graphics really demand VR compatible titles to be launched.

Bearing that in mind, people have been asking about what VR games are out for PS4, and we collected some great ones you have to try out with your virtual reality headset on.

Star Wars Battlefront is a great game on its own, but what we’re talking about is the X-Wing mission you can take in-game, allowing you to immerse yourself in VR to be a pilot on that Galaxy Far Away.

The mission is important for the Rebellion, and you don’t want to leave them hanging do you? Besides, even if you prefer the bad guys, this is the perfect chance to see their armada up close and personal.

If dogfighting in space right in the middle of the Star Wars universe sounds good, then you really want to get this game along with PlayStation®VR and a trusty PlayStation Camera to try it out.

The only negatives are these accessories are sold separately, but if you’re looking for VR games you probably know that already.

If the Star Wars Saga is popular, Batman has become increasingly popular these days, most due to memes!

If you want to use Batman’s gadgets first hand while helping to unravel an evil ploy that threatens not only you (Batman) but your allies and Gotham as well, then this is right down your alley!

If you consider the X-Wing Mission wasn’t enough to tickle your dogfighting lust, then know there’s another game you can choose, and this is all about space fighting, evasion, firing, maneuvering, and more.

Test your piloting skills in this space arena, and dive deep via your link to this universe – VR.

Finally, if you want to explore an alien world while on foot, you definitely have to give Farpoint a try. The plot of the mission is to study an anomaly near the giant gas planet Jupiter.

Something happens and both you and your scientists are transported to an alien world. Venture out to explore in person using the newfound power of Virtual Reality.

These are just a few of the VR experiences you can enjoy when using the PS4 and its accessories, but there are some more to find, we just picked the ones we consider were pretty well made and most of you would like to check out.

It’s the dawn of the virtual reality age and people are getting the initial devices. As they are still expensive, VR isn’t mainstream at all, and that’s why people are wondering about what VR mobile content is available right now as mobile fueled VR is cheaper.

Well, although mobile virtual reality headsets are way cheaper than the full-on HTC Vive or Oculus Rift, there’s not much content available, or is there?

We decided to sum up the best 10 apps you can explore with your mobile VR device right now, and if you still don’t have one then don’t fret as you can easily get a Google Cardboard headset for around $20.

This is the first app we have to mention, and quite frankly we think you already knew this one was coming.

These 360-degree videos offer amazing experiences, and to find out these hidden gems, just search the app’s search bar for “VR” or “360” to get a lot of ideas to look to.

Yes, Google Cardboard isn’t just a “device” but an App as well. This is a piece of software assembled by Google to show you what’s possible with VR.

It has some cool clips like zip-lining and a plethora of App ideas you can download, with new ones being released every week.

VRSE was made by documentary makers and aims to help you feel their docs as an experience. You’ll be experiencing movies like never before, from shorts to music videos, but you can also enjoy some more impactful experiences that’ll make you think about the world.

Chris Milk, the Co-Founder of VRSE, is constantly promoting this project so we think it may go far.

Even the New York Times is jumping to the VR Bandwagon. They now have an app, NYT VR, which shows you how you can interact with news in a very different format. You’ll be able to explore the space news from Pluto, ascend to the World Trade Center, live news reports… and more!

A cool and creative idea.

Well, we aren’t going to discuss the plot of this app, but we’ll tell you that you’ll get a terrifying look at virtual reality as you get freaked out from the comfort of your home.

If you like scary stuff, play this game… but don’t play it alone at night.

You can now visit real-world places you always wanted to in person. Google’s Photo Sphere technology was used to get images from the most famous tourist traps in the world.

You can then browse those images and travel without having to spend those exorbitant travel fees.

If you don’t want to just be able to enjoy experiences but also create your own, then you can get Seene to shoot your own 360-degree photos.

We want to give you another pick if you really enjoyed VRSE. Jaunt VR is very similar to it, with both serious and humorous videos.

The strong points are that you can even be in Syria for news events or attending a Paul McCartney live concert.

Education meets games in the InCell VR Platform. It recreates the human body at a cellular level and it lets you fly around, getting to know your cells inside out.

You’ll be racing against a virus wave, and it’s pretty intense and educational.

Finally, RYOT made a lot of different documentaries about earthquakes, riots, refugees, and other meaningful topics. The brand was so acclaimed it attracted the attention of The Huffington Post, a media company that bought the project.

Now, this is just a short glimpse of some of the best content out there. We wanted to give you an outlook on what VR mobile content is available by sharing a variety of different apps from different sectors, from education to experiences, passing through gaming and music videos.

The Best VR Games and Apps Available? An Unfair Guide

If we are going to argue about what VR Apps are the best, we’re going to delve into pretty shaky territory. Why you may ask? Well, we try to keep our posts ever relevant, what our editor likes to call evergreen content, and this is a topic that will get very obsolete very fast.

By the time we’re writing this article, there are a lot of cool apps out there, but by the time you get here and read it, some time probably elapsed and these apps are no longer part of the cool crew, and depending on the date may even be considered obsolete. (If our site is still being suggested by those days then we’re doing something right, which is cool).

So, with what we have to explore, what VR Apps are the Best? Let’s take a look!

Minecraft is always a hit, and so we had to include Minecraft Gear VR on this list as we’re expecting it to keep gathering fans searching for immersion on one of their favorite worlds.

If you love Minecraft, you’ll most probably end up enjoying this experience, but bear in mind that if you’re going to buy one of those cheap VR headsets for it you may feel a bit of motion sickness, make sure you take a break or two when playing.

You can download the app for cheap, but it isn’t free – after all, it’s Minecraft.

A mobile game that had its adaptation done in order to further immerse yourself in all of its destruction, Smash Hit VR is one of the VR hits!

Enter the world of geometry and break every piece of glass and sculpture along the way to the finishing line.

The experience is pretty nice as the geometric world and the glassy art gives you some really cool sights.

Let’s get a bit violent with our favorite assassination agent, this time in mobile VR.

Find the best way to get to your target and make sure you keep on being stealth around the different threats.

There’s a puzzle game component onto it, but it has got a plastic feel that makes you think you’re playing around with action figures, which is pretty interesting but unexpected.

Lara Croft Go is definitely another title on the same genre to look at if you prefer the Tomb Raider franchise.

We could have include Monument Valley instead of Land’s End as both are stunning puzzlers, but this VR approach is superior (although we know this is a matter of personal taste).

Look around the terrain using your own eyes and progress through puzzles that aren’t hard as the game focuses on atmospheric calming feelings with just a little punch of mystery.

Of course that to top this all off we had to include Netflix VR.

If you’re hoping everything in Netflix is accessible in VR we have bad news for you – the series and movies weren’t all transformed into VR experiences in 360º degrees (duh), but there are some titles optimized for VR content.

The strong point of this app is you’ll be able to watch your shows from immersive Virtual Reality rooms with artsy decor and some related elements, so the experience does get immersive.

So, these are our recommendations for now. Of course, there are games and experiences out there that may feel better than these apps, but remember that we focused on mobile apps, ideal for cardboard VR headset designs and those affordable gadgets you mount on your phone.

These are some of the best VR games and apps available now, and I hope you now know a bit more about what to download to make sure you get your headset to run the most impressive experiences to date.

It’s impossible to add everything worth it to this list, but I tried adding the experiences that impressed me the most, so you may as well start with those.

We’ll also make sure to keep the article updated, adding more content as we go on and VR evolves.