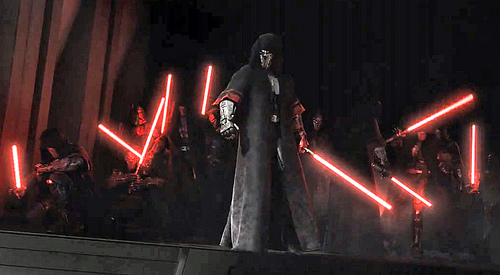 Who is the weakest Sith Lord? Well, if you discard the many Sith footsoldiers who were at the lower ranks before the rule of two and you only consider the high ranking Sith, the answer is Darth Maleval

If you are wondering who is the weakest Sith Lord ever, then you must know this question isn’t as simple as people usually think.

When the Star Wars movies are happening, there is a rule of two in place which says only a Master and an apprentice should exist at any given time, and this is why Darth Maul was a secret apprentice, his existence was actually illegal for the Sith.

On the other hand, there were times in which the Sith were legion, and there was no rule to how many Sith could exist at any given time.

If you’re wondering about the weakest Sith Lord ever, then let’s get this out of the way – it probably was a random Sith who died during training with his master – as about 85% of them do – or it was one of the many Sith lord footsoldiers of the days of old.

However, I bet this isn’t what you had in mind when searching for the answer, so I’m going to narrow it down to what was the weakest high ranking Sith Lord ever – with the Rank of Darth and in a prominent position.

Having said that, the answer is Darth Maleval, a pathetic excuse for a Darth I’ll tell you all about.

An Intro to the Question: How Do You Determine Who Is The Weakest Sith Lord?

So, there are some nuances on how to pick the weakest Sith Lord ever.

First of all, you have to look at different topics like Force Mastery, Leadership Skills, Lightsaber Dueling skills, Force Knowledge, Scientific Knowledge, Sith Sorcery, and so on.

I tried to have a wide look and consider every one of these topics, and then some.

The context also matters as you have some very strong Sith Lords who sound weak on paper only because they were surrounded by the top Sith ever and so failed to shine or were outgunned by their contemporaries.

This matters if you want to really get the best picture possible, and I thought I’d say this beforehand.

Darth Maleval Was In a Position of Power: He Accomplished Nothing

First of all, Darth Maleval was in a position of power. He was working under Darth Krayt and he was given command of a whole Stormtrooper battalion, the 908th Stormtrooper Division.

The fact that he was given a position of command when he didn’t even prove his worth and has no recognizable feat just goes to tell you how the Sith weren’t doing so nicely during those days, even though there were a couple of strong Sith to consider like Krayt himself, Darth Nihl, Darth Maladi, and Darth Talon.

Consider the Sith of old though, and even with these names the Sith are paling in comparison.

What did Darth Maleval achieve as a commander? He lost the loyalty of some troops and got killed in the process.

I’ll tell you more in a bit.

He Wasn’t a Beast in Neither Lightsaber Dueling Skills nor Force Control: A Generalist of Average

Let me tell you about his powers and abilities per se.

Darth Maleval didn’t specialize in anything and was a generalist who decided to be mediocre at everything.

As far as lightsaber combat is concerned, he was skilled in using a lightsaber and a force whip, but excelled at none and wasn’t that great of a fighter.

On the other hand, he was proud of his specialization of Force Power which was sensing incoming attacks through the Force.

Want to know the kicker?

He was killed by surprise… not that great of a sensor then right?

He Got Killed by a Simple Trooper: A Trooper Shot Him and He Died

This is the pinnacle of irony.

Darth Maleval was given responsibility for a Stormtrooper division and his Force Power was sensing attacks.

He then proceeded to lose the loyalty of the division and surprised by a shot in the back from a trooper he was actively threatening.

I mean, Darth Maleval, if you’re going to threaten a pair of troopers, you should activate your Force Sense special ability at the very least, or pay attention to them if they don’t call your bluff.

And this is the story of how a Sith Lord got shot in the back from a random guy who wasn’t Force Sensitive and who he already suspected had no loyalty towards him.

I hope you could appreciate this wonderful Sith Lord Fail story and how it shows that even the Dark Lords have that one guy who is just a useless guy with delusions of grandeur.

Force Sense? I think his power was Force Fail.