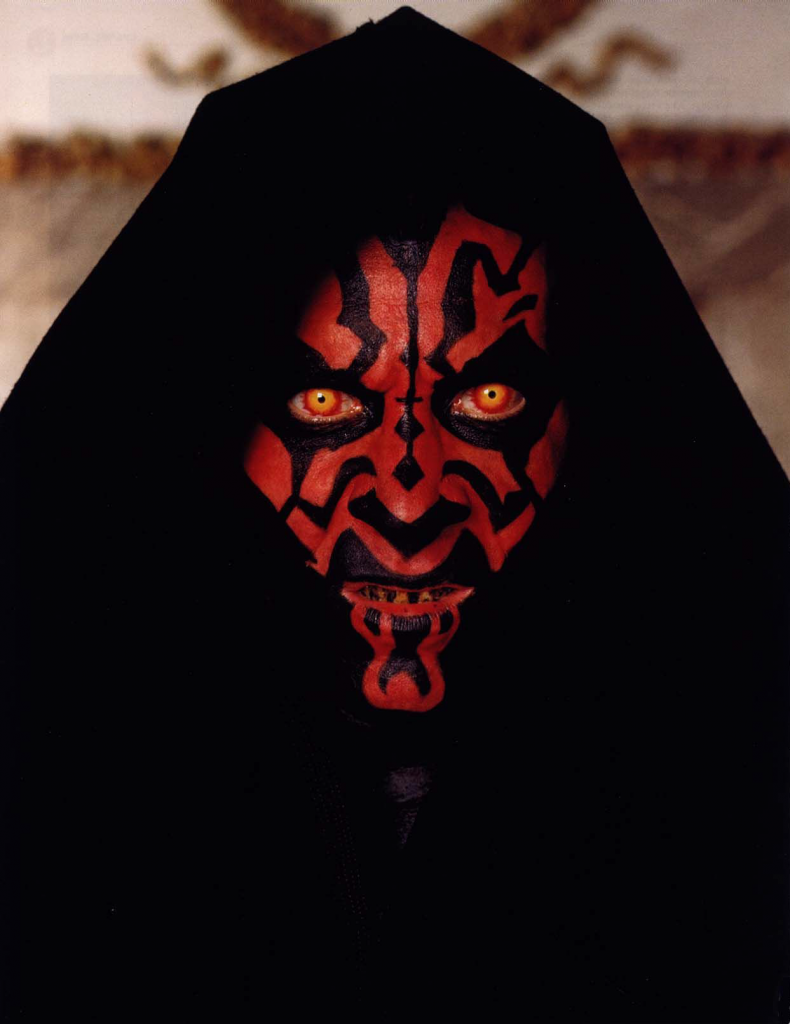 Why Are Sith Lords’ Eyes Yellow? And why do Sith Lords and sometimes even dark jedi present themselves the way they do? Let’s try to answer that, shall we?

Sith Lords are full of style with their dark robes and red lightsabers, but they do tend to have some signs of body decay depending on how deeply they are corrupted by the dark side of the force.

You can even refer to Darth Sideous dry grape look, and other cases of dark side corruption – even on Star Wars video games like Knights of The Old Republic.

This article, however, goes over why are Sith Lords’ eyes yellow, and that’s what we’re going to explain to you, since the answer is pretty simple.

Sith Lords’s Eyes Turn Yellow When Corrupted by the Dark Side:

The short answer is that Sith Lords get their eyes to turn yellow when they reach a certain point of corruption by the Dark Side.

There are a lot of points backing this argument up, and we’re going to go over them on the next paragraphs.

Basically speaking, if you tap into the Dark Side of the Force past a certain level, you’ll get them as a sign.

Now, you probably will remember that the Sith Count Dooku never had those yellow eyes, but it doesn’t take a rocket scientist to see that the Sith played by Sir Christopher Lee had his emotions in check.

He wasn’t that Sith full of rage and hatred you are used to seeing – he was controlled and he was dominating the Dark Side, not the other way around.

One can easily argue that had Count Dooku completely given in, he would be hugely powerful as he was a force to be reckoned with while even keeping the Dark Side controlled.

Anakin Skywalker Had Them in Certain Moments:

While watching the prequels, you can easily see that Anakin Skywalker had his moments of yellow eyes, and his eyes kept coming back to normal from times to times.

This was certainly something we first didn’t know what to make of while on our quest to find out why are sith lords’ eyes yellow?

We later figured it out – it happened because he was still struggling, up to the point in which he turns to Obi-Wan Kenobi and yells with hatred, when his eyes turn yellow and permanently stay that way – revealing that Anakin finally fell to the Dark Side, completing his transformation to Darth Vader.

The Darth title is something people have been wondering about too, and we recently discussed it in our article “Why are Sith Lords Called Darth?” – you should check it out.

Darth Sideous / Senator Palpatine Kept the Corruption at Bay: Until He Had to Get More Power!

This is the final argument to tackle the issue of Dark Lords having those yellow eyes.

If you take a look at Darth Sideous A.K.A Senator Palpatine, you’ll notice his eyes weren’t yellow for most of the prequels.

This happens because as a huge scholar in the force, Darth Sideous knew he had to keep his corruption controlled in order to keep playing that double faced character in order to fool the entire galaxy into submission.

He was forced to give in to the Dark Side, tapping into it to get “Unlimited Power” to kill Mace Windu.

Darth Sideous was immensely knowledgeable of the force and very strong, so when he knew he had to tap into that dark power to kill Mace, he feel deep into the dark side, turning into an old prune with those yellow eyes.

Why Are Sith Lords’ Eyes Yellow? What is it with the Sith Lord Names?

Well, you have to consider these questions after you really started to delve deep into Star Wars, and these are the sort of questions we really want to answer over here.

Sith Lore is not as poor as you’re initially led to believe, and in fact there is a lot of hidden knowledge to uncover, even when you consider that the recent Disney acquisition stripped most of the lore out of the equation thanks to declaring all books and all expanded universe stories non-canon, which really did a great job upsetting the fans.

These fans spent years researching lore, such as I, and amassing millennia’s worth of history only to having it declared as “never happened” is something that really grinds my gears.

Well, first of all, even though it doesn’t have a lot to do with the explanation I should just tell you he isn’t a Sith.

Now, on to the explanation. If this question is bugging you and you’ve been thinking about the meaning of sith eyes or yellow eyes, you have to take a read at a post I made that thoroughly explains Sith Yellow Eyes in general.

Have you read it? Good.

Now we follow through to explain Kylo Ren’s particular case.

Kylo Ren Has Normal Eyes: Why?

If you read the article I recommended, you’ll now know that the degree of corruption and how far the characters have fallen towards the Dark Side of the Force is totally connected to this phenomenon.
As such, you can easily tell that Kylo Ren isn’t that deep into darkness as the plot seems to suggest.
The absence of these yellow eyes is just another evidence that Kylo is redeemable and as such we can speculate that he will eventually turn towards the light as he struggles to keep his heart dark.

You can see in the prequels that Anakin had these eyes at times, because it was his transition, but you can also consider Kylo to be his polar opposite.

This is the simple answer to how Kylo’s eyes remain unchanged, but I suspect he will see intermittent eye colors as he struggles between light and darkness, but only the upcoming films can clear that out for us.

This has been out attempt at answering the “Why Are Sith Lords’ Eyes Yellow?” question, and we do not say it is the definite answer because we want your input on this and we want to consider any argument we could have overlooked.

There’s a lot of lore to approach in Star Wars, and while we do our best to have everything into consideration, let us know if anything escaped our grasp by typing your arguments on why are Sith Lord’s eyes yellow down below on the comment section.